For me, it doesn't make sense to have both a personal blog and farm blog. The farm is so much a part of me. We live here, love here, I work here. We cook from the produce in the fields. Our 'kids' live and die here and follow me to the field. Almost everything I  think about revolves around this place. 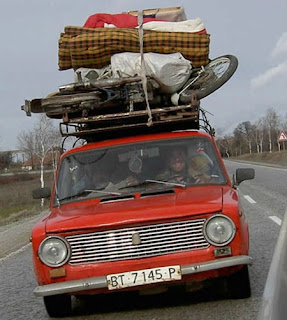 I've decided to combine blogs. So, visit me at Seven Cats Farm Blog. Come on over and have some fun!
Posted by Sydney at 8:30 PM 1 comment: Links to this post 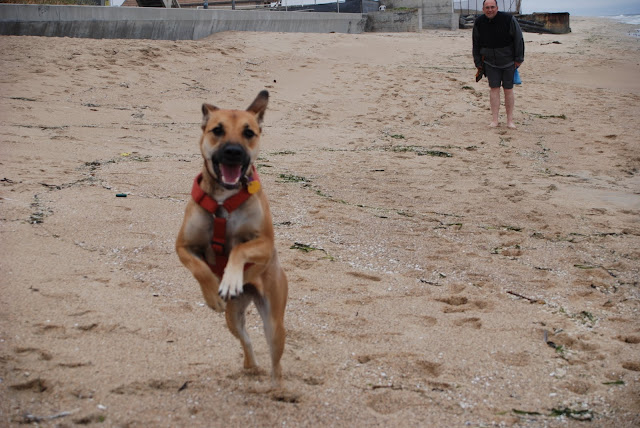 And then we added Gracie. 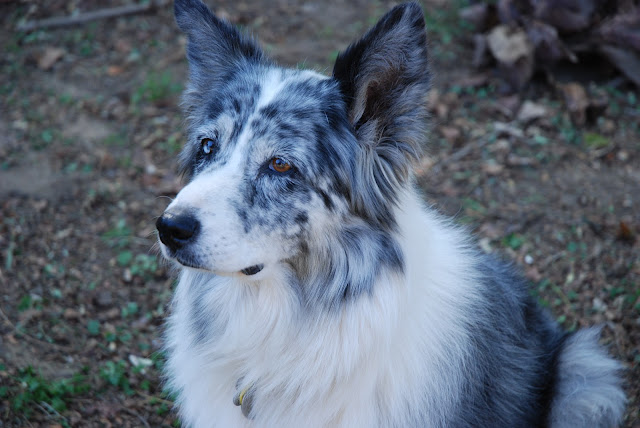 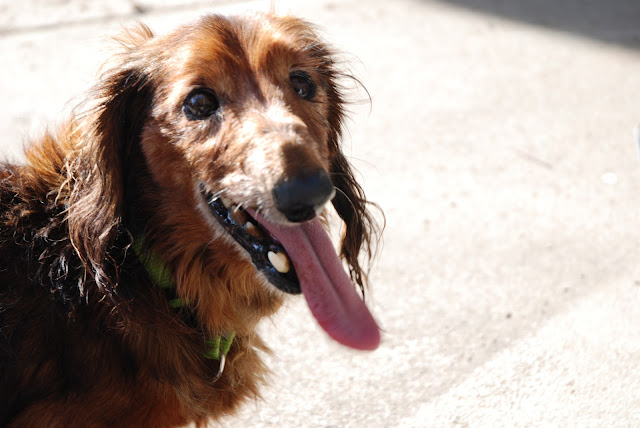 Rudy was put in a shelter drop box on Christmas morning. Abandoned. Given away. Cast aside. He was 12 or so years old and in bad shape. Thank goodness for Peace of Mind Dog Rescue! This organization specializes in animals that have owners that can no longer care for them AND in older dogs that would be euthanized because they don't fit shelter adoption age requirements. Rudolph was obviously in the latter category. 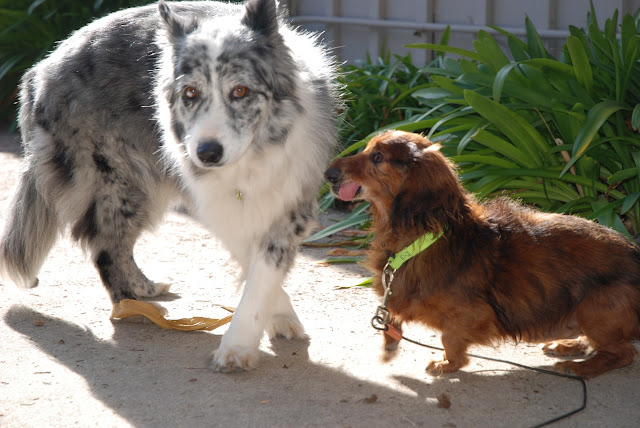 We got Rudy as a foster dog right after the first of the year. He had horrific breath and was still, um... 'intact' as they say in vet speak. What that meant was the poor Gracie was the constant object of Rudy's affection. Constant. Non-stop. All the time. No Viagra needed. I couldn't take it. It was awful.

A week after we got him, Rudy went to the amazing Dr. Judy Force for dental surgery (and to get 'snipped' - thank God!). He had loose teeth and of course that long fang of his had to be removed. We thought is would be a couple hours. That would have been bad enough. But no - Rudy's mouth was worse than anyone had anticipated. Poor little 12-pound boy was in surgery for almost 5 hours. In addition to being neutered, all of his teeth were removed. He had six holes in his mouth that went into the bone. The holes that were in his upper mouth went into his sinus cavity. Food got in there and that's why he smelled so bad. Those holes had to be repaired. Dr. Force said that Rudy's mouth was in her personal top two of the worst cases she had ever seen. 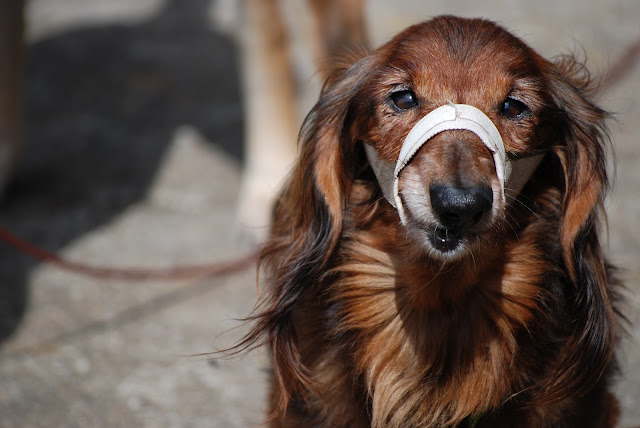 So, three months and three surgeries later, Rudy has become a big part of our family. He is funny and makes us laugh. He doesn't stink. He leaves Gracie alone. He puts Cinnamon, a dog four times his size - in her place. He runs up and down the hallway, stays right at my heels when we go to the beach, and eats like there is no tomorrow. Poor little guy will always have a droopy nose as the bone in his nose and jaw have deteriorated away. Rudy is a good reminder to all of us that dental care is really important and we need to floss. Floss, people! 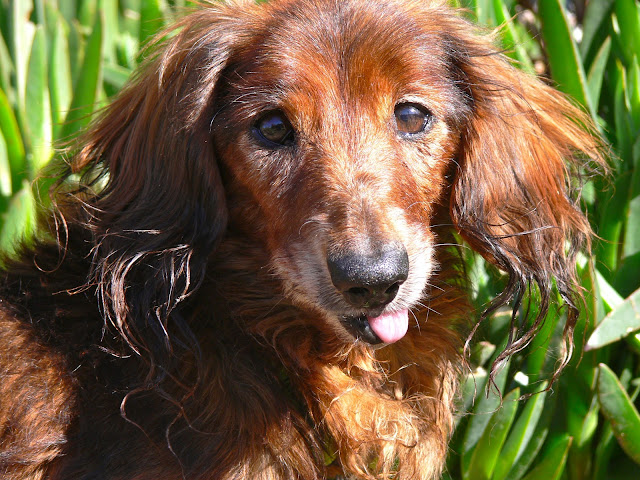 I believe we are done now. one adult child, three dogs, six inside cats, seven mousers (well, we're up for a few more mousers), and three chickens. Well, we might get a few more chickens, too. You know - we're a farm. And we might get some goats, too. But that's another day. And another story.
Posted by Sydney at 11:11 AM 4 comments: Links to this post

Looking out My Bedroom Window

It's a cold, blustery day today. I'm doing a lot of laundry folding. You know the kind... baskets and baskets of clean clothes on your bed kind of folding. I was dumping over yet another basket when I looked up and lookie at what I saw!!! 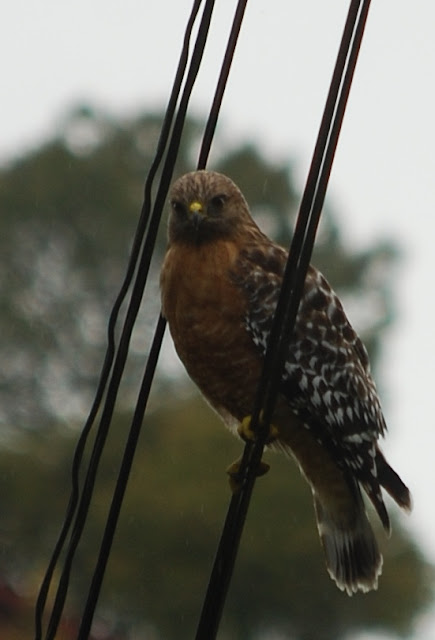 A big and beautiful hawk. 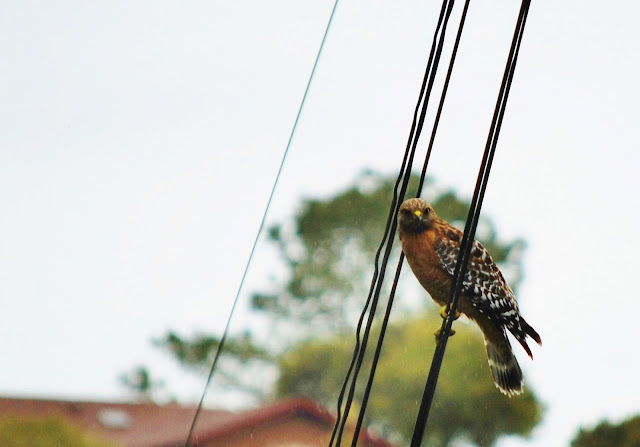 It was pretty windy and he was hanging on tight. 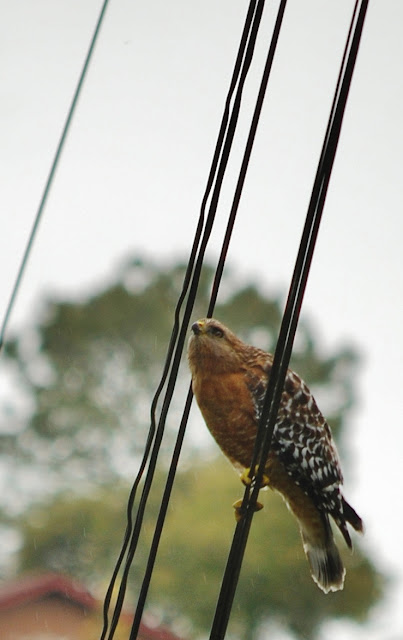 There were a couple crows diving at him. They wanted him away from their nests. Too bad I didn't capture a clear photo of that. 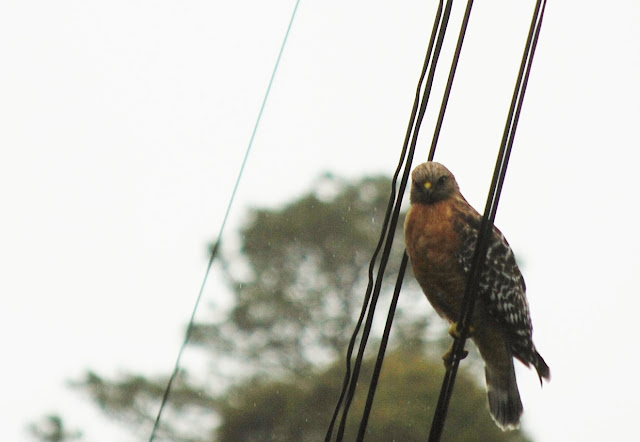 Check out the hummingbird getting in on the action! 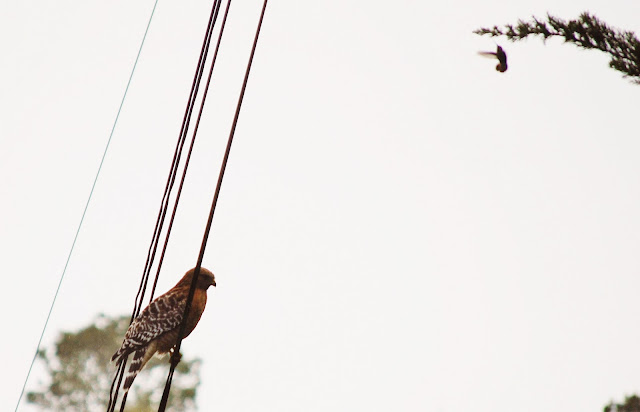 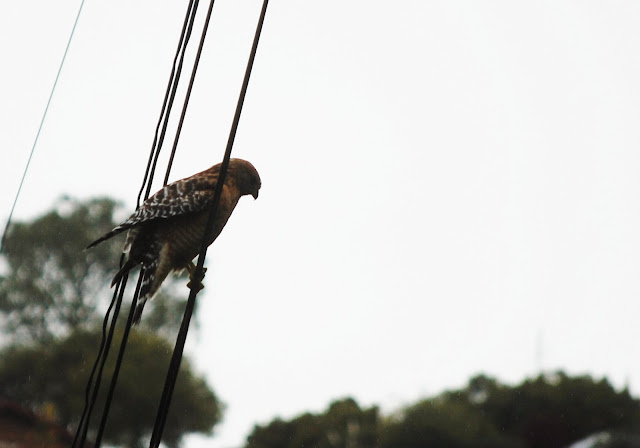 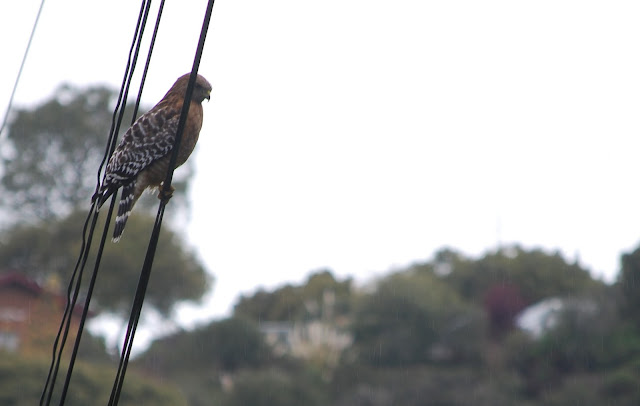 And then, he was gone. 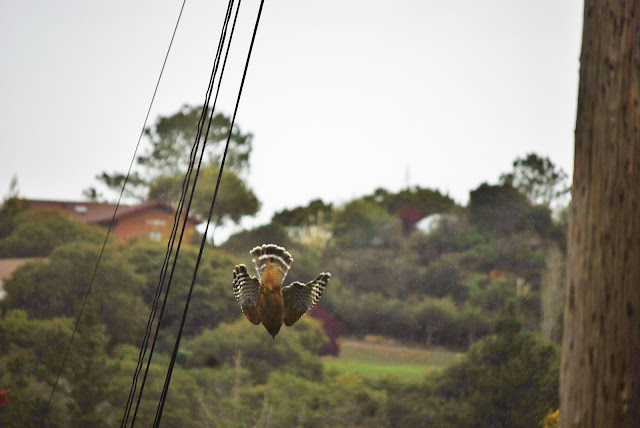 Thank goodness I kept the chickens in today!
Posted by Sydney at 10:31 PM No comments: Links to this post

Our Mousers-in-Training have been fed by us in this cage for about a month. We covered them up at night to protect them from the wind and rain, and uncovered them and fed and watered them in the morning. They are used to our voices calling out when we bring them food. They are not terribly fearful when we show up in the morning. In fact, they anticipate our arrival and call to us that they are hungry.

It is time to release them. 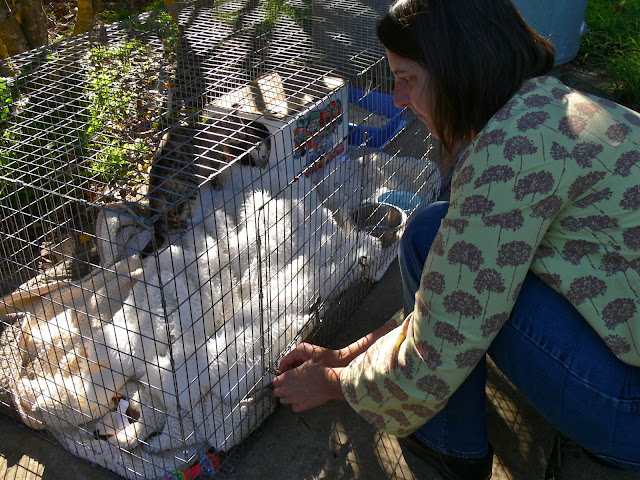 First, we take the cage off the saw horses and put it on the ground. Then we open the doors and step back. It is their turn to again be brave. 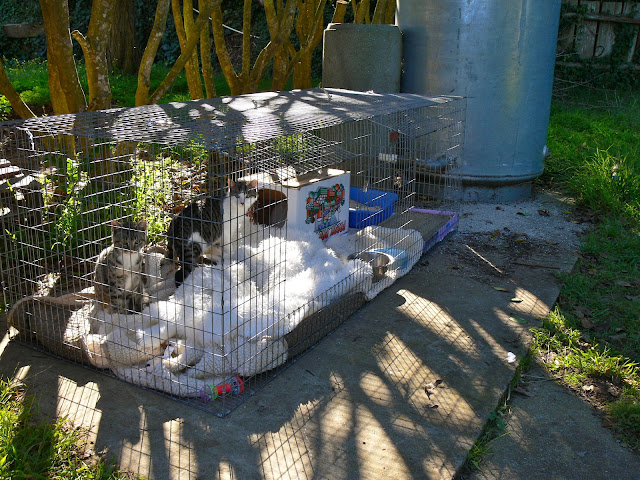 They are a tad freaked out at first because they haven't been on the ground in a month. 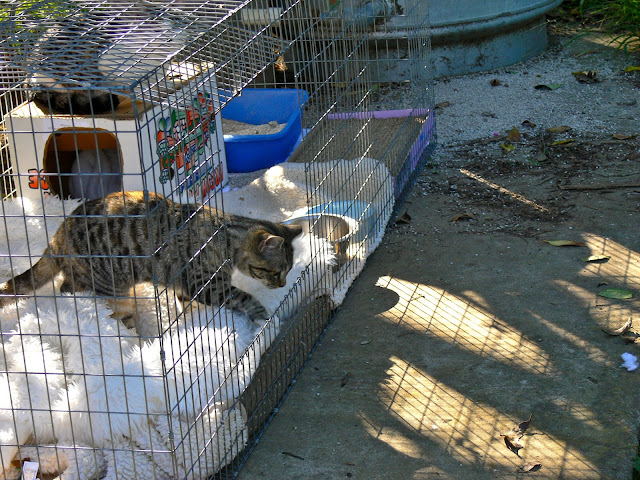 One always leads the way 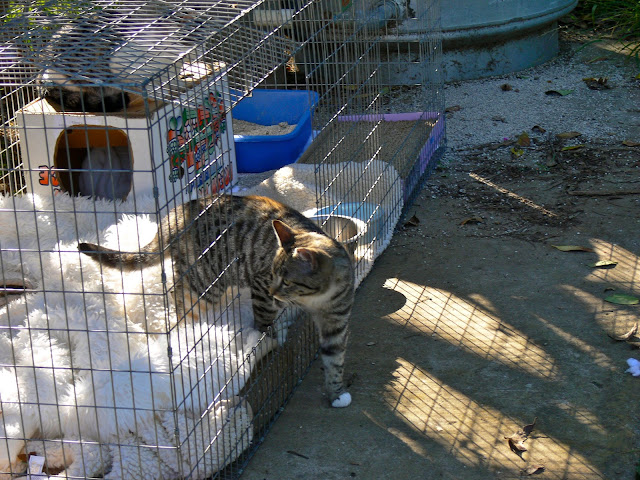 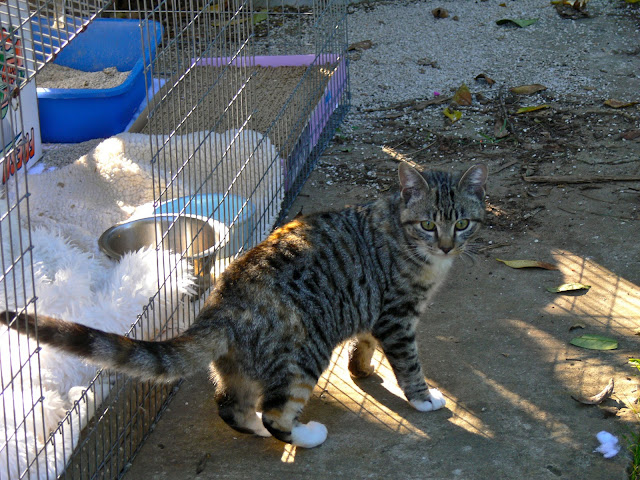 The other will follow. We needed to step away so he would come out. They have been out for about two weeks now. They are now part of the backyard pride and have fit right in. We have been receiving presents in the form of voles. And - they have let us pet them. :-)

Posted by Sydney at 11:21 AM No comments: Links to this post

These little guys arrived on January 25th from the awesome folks at Project Purr. 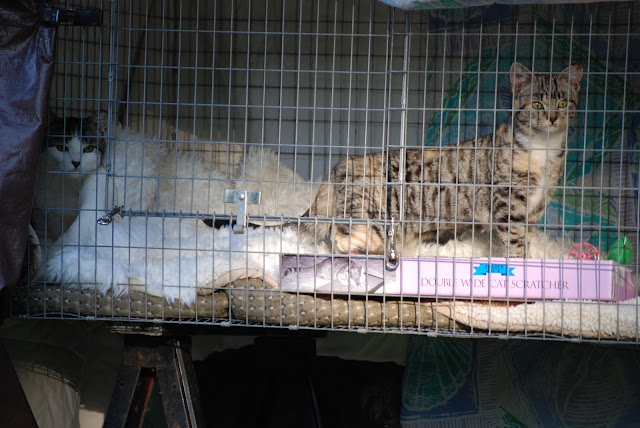 They stay in the cage for about 3 weeks to imprint to us, our location, and the fact that we bring them food. 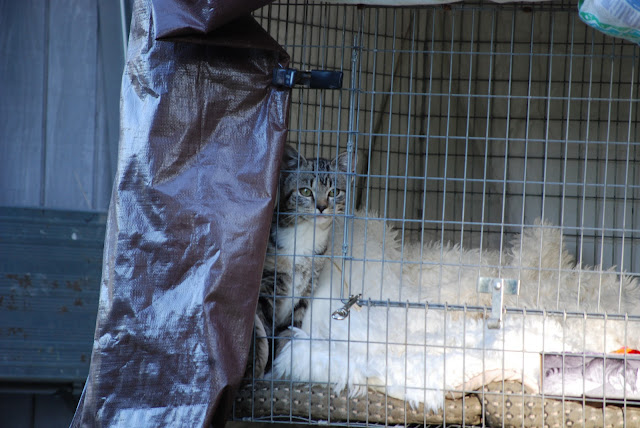 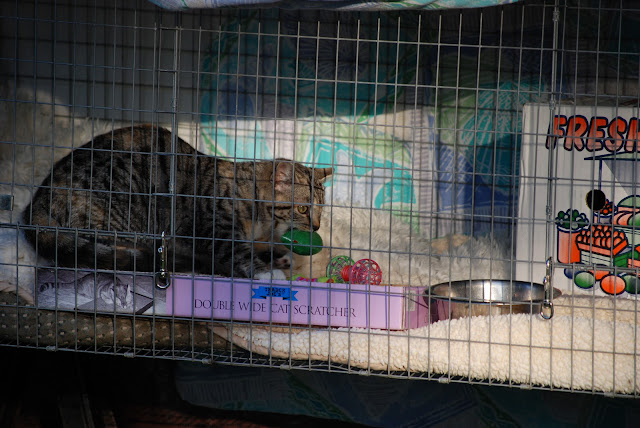 Posted by Sydney at 10:21 AM No comments: Links to this post

And now, the fix 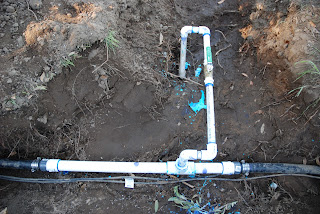 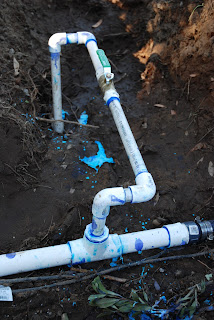 Much cleaner than the patch we put in. We'll need to wait a few days to make sure it doesn't leak, and then we'll bury it with gravel, then dirt.

The bad news is that the poly main line will eventually need to be replaced. Looking on the bright side of that big expense, we will have the opportunity to design our watering system for the farm. We'll get to determine where we want hose bibs, which also means I'll need to determine what the layout of the land will be and how it will be used. It's both scary and exciting, all at the same time. But isn't everything worth doing scary and exciting?
Posted by Sydney at 3:04 PM No comments: Links to this post

What did YOU do this weekend?

A harmless question, wouldn't you say? Harmless unless your weekend was filled with angst, sleuthing, digging, flashlights, swearing, trips and more trips to the hardware store, calls to plumbers and well pump companies.

This is how we spent our weekend.

It looks benign enough, but what a pain this was. The moral of the story is twofold.


Posted by Sydney at 2:09 PM No comments: Links to this post

Websites and Blogs to Check Out On the Endangered Species list... less than 300 are left